The Thais Know What to Do With a Corrupt Government

Now if only Americans would learn. And consider the bias when you read the AmeriKan MSM account, readers. They will be bashing and lying about the Thai protesters. They don't want Americans getting these kinds of ideas. 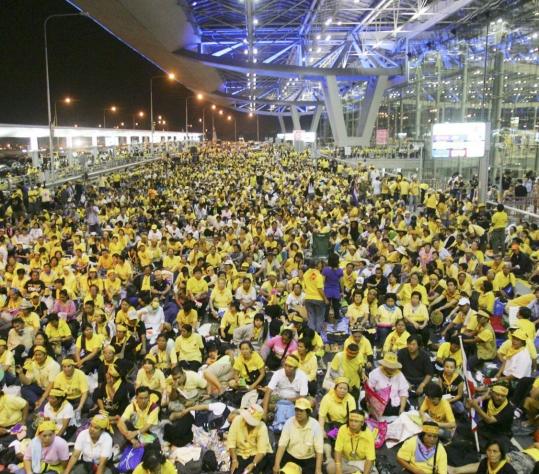 That is what YOU SHOULD BE DOING, America!!! STOP GOING TO WORK, put everything aside for now, and FORWARD, HARCH!!!!

And as I hit the second paragraph I realize this adjunct of the New York Times has completely rewritten and reedited my printed paper copy. They BUTCHERED IT!!!!

I can not convey to you my dejection at the MSM CENSORSHIP and the fact that I now have to WASTE TIME HAND TYPING several paragraphs!! Yes, HATE is not too mild a word for my feelings towards the New York Times, International Herald Tribune (the NYT's international mouthpiece of propaganda) and the Boston Globe (the NYT's bastard child, which I purchase for $1 at the corner store every day). They suck (blog author types in pained agony and frustration)!!!!

Throughout the day yesterday, thousands of protesters kept the Thai government on the run, blocking the entrance to the government's temporary offices at the old airport north of the city and massing in front of army headquarters.

Yeah, you wouldn't want to give Americans any ideas, would you, NYT?

Yesterday was the second day of what the leaders of the long-running protest vowed would be their final push to unseat the government of Prime Minister Somchai Wongsawat. On Monday, protesters forced the cancellation of an important session of Parliament and temporarily cut electricity supply to the police headquarters.

The people's Alliance, as the group leading the movement to unseat the government calls itself, still has a remarkably loyal following, mainly among middle- and upper-class Thais, students and some union members.

Translation: The PROTESTERS are the PEOPLE!!!

If you read the link I provided earlier, you would KNOW that the AmeriKan MSM (and their flagships, the New York Times, Boston Globe, and International Herald Tribune) are ONCE AGAIN OBFUSCATING and LYING!!!!