The Sleeping Terrorists of Afghanistan

"Children Killed By U.S. Airstrike In Afghanistan Were Guilty Of SleepingWednesday, August 27, 2008 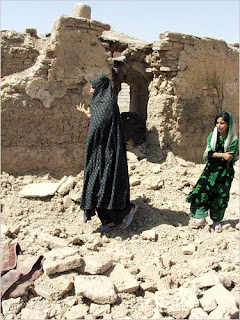 They had come together for a solemn occasion. But they had no idea how solemn the occasion would become.

The head of the Afghan Independent Human Rights Commission, Ahmad Nader Nadery, has confirmed reports that a memorial ceremony was being held for a militia commander allied with the police [...], and relatives and friends from outside the area were staying overnight in the village.

The adults were tending fires, cooking the next day's meal. The children were sleeping.

[Mohammad Iqbal ] Safi, the member of Parliament, said the villagers had been preparing for a ceremony the next morning in memory of a man who died some time before. Extended families from two tribes were visiting the village and there were lights of fires as the adults were cooking food for the ceremony, he said. 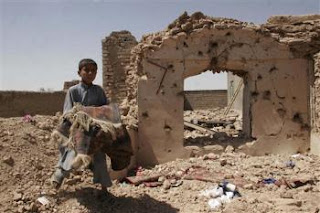 Then the bombs started falling. American bombs. NATO in name only. American.

At least 90 percent of all aircraft being used in the Afghan war belong to U.S. forces operating under their own command structure.

"Civilian casualties are primarily being caused in airstrikes in support of the counterterrorism mission that the United States is running completely separate from the NATO-run counterinsurgency conflict," said Gerlasco, who has compiled a report on civilian deaths from airstrikes to be published next month.

When the bombing finally stopped, seven or eight homes had been destroyed and many others had been damaged.

"The destruction from aerial bombardment was clearly evident with some seven to eight houses having been totally destroyed and serious damage to many others," the [UN] statement said. 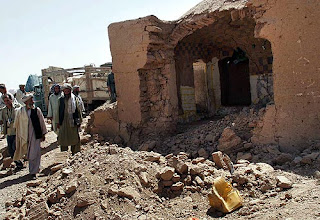 The vast majority of the strikes, Gerlasco said, are unplanned missions called in by U.S. Special Operations ground forces fighting Taliban units or because a "target of opportunity" is located through on-the-ground intelligence.

Unlike in Iraq, where U.S. forces frequently use 250-pound bombs to make attacks more precise, Gerlasco said American troops in Afghanistan "are still using a lot of" 2,000-pound bombs.

By the time the sun came up the next morning, more than seventy people were dead.

At least ninety have died thus far, from this one attack.

And two-thirds of them were children.

Mohammad Iqbal Safi, head of the parliamentary defense committee and a member of the government commission, said the 60 children were aged from 3 months to 16 years old and that they were killed as they slept. "It was a heartbreaking scene," he said. 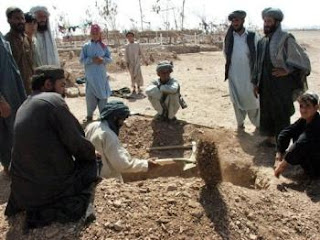 Ghulam Azrat, 50, the director of the middle school in Azizabad, said he collected 60 bodies Friday morning after the bombing.

"We put the bodies in the main mosque," he told the Associated Press by phone. "Most of these dead bodies were children and women. It took all morning to collect them."
...

An AP photographer who visited Azizabad yesterday said he saw at least 20 graves, including some graves with multiple bodies in them. He said he saw about 20 houses that had been destroyed.

It's the sort of damage that can't easily be undone. But that hasn't stopped the Afghan army from trying. 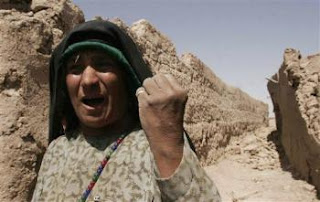 Azrat said villagers threw stones at Afghan soldiers when the troops tried to give food and clothes to them. He said the soldiers fired into the crowd and wounded eight people, including one child critically injured.

Pentagon spokesman Bryan Whitman said military commanders in Afghanistan continued to believe that the attack in Herat "was a legitimate strike on a Taliban target."

Sure it was. A legitimate strike. A Taliban target. Yessir. What-ever-you-say, sir.

An anonymous spokesman blamed the result on bad intelligence -- from the Taliban!

A U.S. official in Washington, speaking on the condition of anonymity, said the Taliban has become adept at spreading false intelligence to draw U.S. strikes on civilians. "The fact is that the Taliban now has pretty good insight into where we're picking up information and how we're developing it into actionable intelligence," the official said. "They've figured out a way to misguide us." 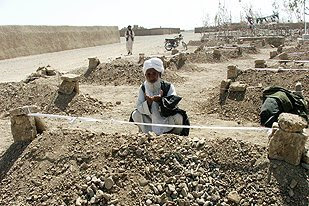 It's the Taliban's fault if we bombed innocent women and children. We would never do such a thing on our own. Would we?

They just gave us some bad information, did they? And we believed them, did we?

They called an airstrike on their own people -- innocent sleeping children -- just for some publicity?

What kind of sick mind would even think of something like that?