Digging For the Truth

"DIGGING FOR THE TRUTH 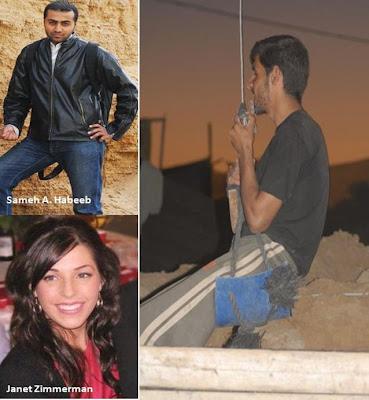 DIGGING FOR THE TRUTH

By: Sameh A. Habeeb and Janet Zimmerman

Lucky we were to have fled imminent death as more than fifteen F-16 rockets bombarded the tunnels area where we had lit a fire the previous night to drink tea and talk story about life in the tunnels. Many houses were partially destroyed due to the heavy bombardments, but no casualties were reported.

South of the Gaza Strip, a very strange phenomena is taking place. People are racing time, using primitive ways to get food and achieve a good life. The people in the Gaza Strip, the most densely populated area in the world, are forced to face death in order to attain life's basic necessities. This is against all humanitarian laws, and the rights of these laws were stripped from the Gazans by Israel. Border crossings were closed as a tightened siege was imposed two years ago.

Consequently, a complete paralysis hit the agricultural, medical, economical, and all sectors of life. People were trapped in a large concentration camp called Gaza, and they are still, where no one is allowed to get in or to get out. Students are deprived from their education abroad. Three hundred patients died due to the inability to travel for treatment, while some others died due to lack of medicine altogether. There is no gas for heating, and power cuts are frequent. The Gazans were pushed to use alternatives to get life back after the Israelis robbed them of basic necessities. The alternatives were an amalgamation of fear, freedom, death, and life. They started to dig tunnels that linked Gaza with Egypt in order to bring what Israel had made taboo for the Palestinians.

In the sixties and seventies, some tunnels had already been excavated for the smuggling of jewelry and food, and this trade flourished when Hamas came into power in mid-2007. Now more than two thousand tunnels have been dug through the borders to reach Egypt, each varying from 100 to 1,200 meters. Thousands of people began to work as daily laborers in order to bring sweets, animals, flowers; basic things, for without these tunnels people would be starving and would have nothing. Ultimately, they are used to drag food into the Palestinian side because these people are trapped inside Gaza as the crossings are closed. These tunnels are their source of life. On the contrary, working in them automatically makes them an associate with tragedy, and it is a frequent visitor. It is a hazardous operation where more than one hundred out of these thousands of laborers died, and they are still dying.
After forty-five minutes night began to fall and we were not yet able to accomplish our mission, which was to discover the mysterious motives behind this labyrinth of tunnels. Finally we managed to meet Abu Rani, a twenty-one year old and the breadwinner of his family of eleven. His house was bombed during the war and he has no source of income. He stopped working in the tunnels out of fear, as they had taken the life of both his father and his brother. "I became crazy!" he said. "I have nothing but God to help me."

In the background, there was a busy area in which bulldozers were digging back the tunnels that were destroyed by the Israelis F-16s that had raided thousands of tons of explosions on the area. The bombing not only resulted in the destruction of these tunnels, but many houses neighboring them. Many people were gathered at sunset to watch the bulldozer, and we learned that one of the tunnels had just collapsed on five individuals. We saw the red lights flashing as the sirens roared past us. After three hours and many attempts, the paramedics were fortunately able to retrieve all of the victims of the collapse alive. However, they were in critical condition due to being buried beneath twenty-three meters of sand and nearly suffocating.

It then took thirty minutes for Abu Rani to drive us to meet Abu Jehad. He gave us valuable information about how the tunnels were built and how food was brought over from Egypt. According to Abu Jehad, building a tunnel takes two to four months in which more than ten people work for more than ten hours a day in the digging process. The laborers dig using shovels and hammers, and each of them risks his life for one hundred dollars a day.

"These tunnels are deadly and dangerous, but we have no choice but to work in them. We are jobless, and it's good money. I used to work in Israel years ago, but was kicked out and turned jobless because I was Palestinian," Abu Jehad explained. "Two years ago I turned to work in these tunnels, despite not agreeing with them. I know it is a journey towards death to bring food, but we have to remain alive as Israel deprives us the basics of life. Within the war, Israel destroyed most of these tunnels and did not allow everything in the Gaza Strip, but here we are trying to dig again in order to bring life."

Israel claims that these tunnels were used for the smuggling of weapons, but what we have documented and witnessed is that most of the tunnels are being used for food and necessities prevented to go through Israeli crossings and into Gaza. A few Palestinian militants do smuggle light weapons, however these light weapons cannot stand against Israeli military high-tech.

Access to food, freedom of movement, and a just life is being guaranteed by all humanitarian charters. Collective punishment is prohibited and sometimes can be considered as a war crime when it comes to depriving people of food. Israel violated these charters flagrantly as Amnesty International, Human Rights Watch, and all organizations working in occupied Palestine said. Israel defends itself by saying that they allow everything into Gaza, however, hunger still prevails as Israel only allows limited food supply into the Gaza Strip. Less than one hundred vans are permitted, despite that it was seven hundred before the siege. At the end of the day, what Israel says goes, and the Palestinians are still suffering.