We all knew it was a matter of when, not if. Georgie on deck for Iran, right?

I'm expecting a lot more of this:

A Palestinian man reacts over the body of a member of the security forces of Hamas at the site of an Israeli missile strike at the security headquarters in Gaza City, Saturday, Dec. 27, 2008. Israeli warplanes demolished dozens of Hamas security compounds across Gaza on Saturday in unprecedented waves of simultaneous air strikes. Gaza medics said more than 120 people were killed and more than 250 wounded. (AP Photo/Fadi Adwan)

In fact, here is another photo right now (the first thing I looked at on the blogs)!

ALL OUT WAR IN GAZA AS ISRAEL ATTACKS

And for a tremendous array -- sadly -- of articles, please visit this website and start reading.

Barak says Israel does not intend to allow Islamic Hamas militants who rule Gaza to continue firing rockets and mortars on Israel's southern communities. Hamas says at least 192 Gazans were killed in the first day of the offensive and 270 were wounded....

HOLY CRAP!!!! I'm astounded at the total. Also moved on a Saturday, when no one is paying attention.

Barak.... said "now is the time for fighting" and that "the operation will expand as necessary. Israeli warplanes retaliating for rocket fire from the Gaza Strip pounded dozens of security compounds across the Hamas-ruled territory in unprecedented waves of airstrikes Saturday, killing at least 155 and wounding more than 310 in the single bloodiest day of fighting in recent memory.

The vast majority of those killed were security men, but civilians were also among the dead.

Hamas said all of its security installations were hit and responded with several medium-range Grad rockets at Israel, reaching deeper than in the past. One Israeli was killed and at least four people were wounded in the rocket attacks. With so many wounded, the Palestinian death toll was likely to rise....

That's about the ratio of it all 200 PALESTINIAN DEAD to ONE ISRAELI, but it is ALWAYS the POOR ISRAELIS who are suffering!

That's why I AM TIRED of the MSM!! Now I DREAD EVEN MORE what I will find on all my favorite blogs. I am WORRIED for THEIR SAFETY and HEALTH!!!!!!! I am so damn angry right now, through the tears of rage!!!!!!!!!!

The strikes caused widespread panic and confusion in Gaza, as black clouds of smoke rose above the territory, ruled by Hamas for the past 18 months. Some of the Israeli missiles struck in densely populated areas as children were leaving school, and women rushed into the streets frantically looking for their children....

Said Masri sat in the middle of a Gaza City street, close to a security compound, alternately slapping his face and covering his head with dust from the bombed-out building.

"My son is gone, my son is gone," wailed Masri, 57. The shopkeeper said he sent his 9-year-old son out to purchase cigarettes minutes before the airstrikes began and now could not find him. "May I burn like the cigarettes, may Israel burn," Masri moaned.

In Gaza City's main security compound, bodies of more than a dozen uniformed security officers lay on the ground. One survivor raised his index finger in a show of Muslim faith, uttering a prayer. The Gaza police chief was among those killed. One man, his face bloodied, sat dazed on the ground as a fire raged nearby.

Later, some of the dead, rolled in blankets, were laid out on the floor of Gaza's main hospital for identification. Hamas police spokesman Ehad Ghussein said about 140 Hamas security forces were killed. Defiant Hamas leaders threatened revenge, including suicide attacks. Hamas "will continue the resistance until the last drop of blood," vowed spokesman Fawzi Barhoum.

Israel told its civilians near Gaza to take cover as militants began retaliating with rockets, and in the West Bank, moderate Palestinian President Mahmoud Abbas called for restraint.

WhereTF have you been, you traitorous jackal and USraeli thug?

Egypt summoned the Israeli ambassador to express condemnation and opened its border with Gaza to allow ambulances to drive out some of the wounded.

Yeah, NOW the god-damned -- I am sorry, my Muslim friends and followers -- Egyptians open the border!! WHERE YA BEEN, Egypt?!!!!!!

Protests erupted in the Abbas-ruled West Bank and across the Arab world. Several hundred angry Jordanians protested outside a U.N. complex in the capital Amman. "Hamas, go ahead. You are the cannon, we are the bullets," they cried, some waving the signature green Hamas banners.

Yeah, and I AM LODGING a PROTEST from my little hell-hole in Zionist-controlled Amerika right here! It doesn't make sense to go down to the corner and rail about Israel; that subject more taboo than 9/11 truth -- and I don't need the dirty looks!!!

In Beirut, dozens of youths hit the streets and set fire to tires. In Syria's al-Yarmouk camp, outside Damascus, dozens of Palestinians protested the attack as well, vowing to continue fighting Israel....

I hope you do go down into the pit because it is NOTHING I HAVE DONE!! You evil pukes have DONE IT TO YOURSELF!!! Looks like WWIII coming up and BYE-BYE, Iz-ray-HELL!!!

So there it is. It's on record, and I'm not saying it anymore. Now you know why you get profanities here sometimes because THEY DO NOT STOP!! This LAST THREE YEARS has been HELL for that little strip of dirt by the sea and NOW ITS WORSE thanks to the mass-murdering NaZionists of Israel!!

The first round of air strikes came just before noon, and several more waves followed.

Hospitals crowded with people, civilians rushing in wounded people in cars, vans and ambulances. "We are treating people on the floor, in the corridors. We have no more space. We don't know who is here and what the priority is to treat," said a doctor at Shifa Hospital, Gaza's main treatment center. He hung up the phone before identifying himself.

Can you IMAGINE IT, America? Can you?

Do you have ANY PERCEPTION in your drug-addled, propaganda-soaked, imaginations at the ABSOLUTE TERROR the Palestinains are living under!!

A rush on the hospital because you have to drive your dying or maimed love one to the hospital -- which likely has no electricity, plumbing, etc, because of the damn war-criminal Israeli siege!!!! 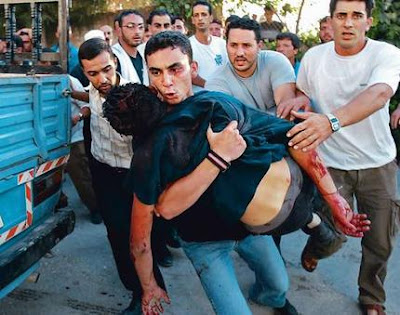 Huge demonstrations have been organized in many countries protesting the Israeli savage aggression on Gaza strip on Saturday. Lebanon, Iran, Jordan and Ramallah have been protesting to show support or the people of Gaza condemning Israel for this inhumane operation....

The BBC’s Rushdi Aboualouf in the Gaza Strip described the chaos as Israeli warplanes fired missiles at Hamas targets, killing at least 155 Palestinians...."

Gaza – Ma’an –
The death toll in the Gaza Strip rose to six on Wednesday morning after another Al-Qassam Brigades fighter died of wounds sustained in an Israeli airstrike near Khan Younis.

Five Hamas Al-Qassam Brigades activists were killed earlier on Tuesday evening by Israeli fire in the Al-Qarara area of Khan Younis and at Juhr Ad-Dik, in central Gaza.

An Al-Qassam Brigades leader, Mazin Sa’da, who is also a police officer, was killed and four civilians were injured including a woman as Israeli forces invaded Juhr Ad-Dik and clashed with Palestinian fighters, according to Muawiya Hassanein, director of ambulance and emergency service in the Palestinian health ministry.... source"

International Witnesses Speak Out from Gaza

GAZA, (PIC)-- Israeli warplanes on Saturday launched a series of bloody air raids on the Gaza Strip that left at least 120 people killed and 200 others wounded.... source"

--MORE PHOTOS FROM ON THE GROUND IN GAZA (SLOW LOADING)--"