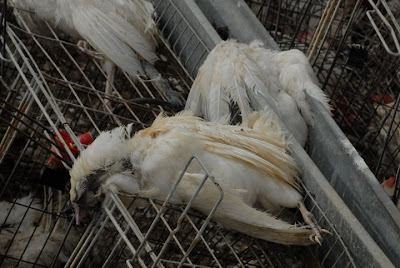 PUBLISHED IN THE ELECTRONIC INTIFADA
http://electronicintifada.net/v2/article10258.shtml

Israel's devastating war on Gaza claimed the lives of more than 1,335 persons and left at least 5,500 other wounded. In addition tens of thousands of utilities, houses, businesses, and factories were partially or totally destroyed. The war caused psychological damage for thousands of people especially children. I reported on the war daily and my focus was on the human toll. However, I recently came across a story that changed my focus completely a revealed to me the true nature of Israel's soldiers and their intent in invading Gaza.

Since the ceasefire was enacted, I have toured throughout Gaza to document some stories and accounts. Although I wrote many articles, I decided to focus on the untold stories of the war: the brutal massacre of thousands of chickens.

On 5 January, many Israeli tanks, troops and bulldozers advanced into the al-Zeitoun neighborhood south east of Gaza City. In this area, called al-Samouni, Israel killed 49 members of the Samouni family, after soldiers ordered them to gather into a single home, which was shelled several hours later.

A number of chicken farms are located only a few meters away from the Samouni house. These farms came under fire by Israeli forces and were totally bulldozed. Thousands of chickens were caught in their sheds, as the bulldozing destroyed their cages. Some died immediately, others slowly without food or water for four days.

Abu Ahmed al-Sawafari, an owner of a chicken farms owners, was sitting amidst the rubble of his destroyed farm. He explained that "I have been working on that profession for long years. I have been growing my business by all efforts. Israelis came then left causing an earthquake in the area. They have killed these chickens, they are equal to human souls. They were suffocated and died due to hunger. I wonder why the Israelis killed these chickens? Were they firing rockets into Israel?"

I continued touring farms in the area where the smell of death filled the air. Surviving chickens roamed around surrounded by thousands of their dead kin. It was an overwhelming scene leaving one to ask only: why?

If this question was directed to the Israeli army their response would be swift and predictable. They would likely contend that "rockets" were being fired from the farms, or that there were Palestinian resistance fighters in the area. However, unless the Israeli army is prepared to claim that these chickens were resistance fighters or were firing rockets nothing can explain why the self-proclaimed "world's most moral army" would engage in the wholesale slaughter of civilians and chickens alike.

Sameh A. Habeeb is a photojournalist, humanitarian and peace
activist based in Gaza, Palestine. He writes for several news websites on a freelance basis.