The success of the cover up emboldened the perpetrators. No U.S. official dares to stand up publicly against the Israeli crimes and influence. The road from June 8, 1967 to September 11, 2001 and beyond has its many twists and turns and should remind us that that deception is the way of war.

Deserving of infamy was the deliberate Israeli air and naval attack upon the USS Liberty, a clearly marked naval intelligence ship, on June 8, 1967. After several hours of aerial surveillance, unmarked aircraft attacked the USS Liberty with gunfire, rockets and napalm. This was followed by an attack by three motor torpedo boats, firing torpedoes and then machine-gunning the ship, its crew and their lifeboats. The ship managed to get out a call for help under extraordinary circumstances, but was nearly sunk, and more than 200 American sailors and Marines were killed or wounded. Israel claimed it was a case of mistaken identity, and the US Government accepted that explanation.

Both lied, and Israel’s lies become evident when one examines the profiles of the USS Liberty and the Egyptian ship the Israelis supposedly thought they were attacking, plus a photo of the USS Liberty itself. Misidentification in a December gale in the North Atlantic might have been possible. On a June day in the Eastern Mediterranean, never, at least by any pilot with the visual acuity to take off and land his aircraft.

Remember that in 1967, Israel’s fighters and motor torpedo boats had to get close to use their on-board weapons against a target. Anyone seeing the radars and electronic arrays on the USS Liberty knew this was not some Egyptian tramp steamer. Finally, there is the USN designation “GTR5” on both sides of the bow & the stern, with the number larger than the letters -- anyone approaching the ship close enough to attack cannot miss that designation, and know that this was a US Navy ship.

But the Israelis attacked anyway, and tried very hard to sink the ship without any survivors while concealing their own identity. They were aided and abetted by US President Lyndon Johnson and Defense Secretary Robert McNamara, who personally recalled separate flights of fighters launched from the 6th Fleet’s aircraft carriers USS Saratoga and USS America, fighters whose arrival over the USS Liberty would have saved most American lives and cost the Israelis a number of aircraft and motor torpedo boats.

What Johnson and McNamara did is appalling. As a Marine who served in Vietnam, I have always despised them for their arrogance and incompetence. After understanding their role in the USS Liberty tragedy, I now despise them twice over for their cowardice and their dereliction of duty, and for giving precedence to a domestic Jewish lobby and their own political interests over the lives of Americans in uniform.
At the very least, both were indictable accessories after the fact in the murder at sea of 34 Americans and a breach of international law, in open violation of their own oaths of office.

So why did the Israelis do it? One possibility is that for them, it was simply business as usual. Israel has a long history of attacking anything in its path – a civilian airliner, UN posts and officials, refugee camps, hospitals, the lot -- and then denying culpability, so the question is not "why," but "why not?" Another was to dispose of inconvenient witnesses to the murder of Egyptian prisoners and civilians at El Arish.

A third was to cloak their strategy of involving Jordan so as to take East Jerusalem and the West Bank. And a fourth was to show other Arab countries that they had such influence in the US that they could do it and get away with it, and perhaps involve the US militarily on their side.

Any of these would have sufficed. What is important to note is that the Israelis had no qualms about deliberately killing Americans and concealing their own identity, doubtless hoping to bring the US in on their side openly attacking Egypt -- they won handily anyway, but they could not be certain of doing so at the beginning of the war. It is something to keep in mind as a possible precedent when we look later at the attacks that occurred on September 11, 2001 and made the US an active belligerent intent on destroying Israel’s enemies.

The tale of the USS Liberty needs to reach the American people. It needs to reach them in a medium that will convey the calculated nature of the attack and the outrage it should evoke. And it should conclude with the statements of so many people in positions of authority at the time who said categorically that the attack was deliberate, and of survivors who lost shipmates there and likewise are convinced that the attack was deliberate and that their own government abandoned them at the time of the attack, and betrayed them afterwards.

Few events are so calculated to enrage Americans as the image of a US ship being deliberately attacked and Americans being killed and wounded by a supposed ally, for its own local purposes. That this “ally's” influence in the US government was so great that a US president ordered back fighters whose arrival would have prevented most of the 200 casualties on the USS Liberty from occurring would compound that outrage. And that this influence allowed Israel both to evade retribution at the time and to conceal knowledge of what happened from the American people, would add insult to compound outrage.

This is the factually accurate message Americans need to see and hear, and it is a message that could impact sharply on what members of Congress -- whose jobs depend on votes even more than they do on Jewish money -- would be prepared to do to or for Israel. It could also give President Obama political room for diplomatic maneuver IF he seriously would like to reorient the way the US does its business in the Middle East.

AIPAC, its cohorts and the hasbara crowd will howl. There will be the usual flurry of fabrications, denials, falsehoods, fear-mongering, character assassination and disinformation that is their specialty. But at the end of the day, more and more Americans will see graphic portrayals of an American ship attacked -- and especially of uniformed Americans killed and wounded -- by a foreign country named Israel, whose domestic clout within the United States in 1967 allowed them to do it with impunity, and whose extended clout since that time has already produced one American tragedy (9/11), taken the US into two wars (Afghanistan and Iraq) and is pointing the US towards two more wars (Iran and Syria). And there is a good chance that a growing number of Americans will say, "Enough! Never again...." and make things happen. Let us begin.

Dead in the Water - The Attack on the USS Liberty - videos

Why in the hell do Americans have to depend on the BBC for a decent doc on the murderous activities of Israel?

The following exchanges are excerpts of testimony from U.S. military and diplomatic officials given to Alison Weir, founder of “If Americans Knew” and author of American Media Miss the Boat:

Israeli pilot to ground control: “This is an American ship. Do you still want us to attack?”

And Israel has been "hitting" the USA ever since. Hitting us for an unlimited amount of money to support that Apartheid nightmare and for advanced weaponry, which our corrupt Congress gladly hands over to Israel who then reverse engineers the weapon, slaps a Yiddish sounding name on our stolen work and sells it to Communist China.{more}

"We had been surveilled all morning and part of the afternoon by Israeli forces. They knew who we were. We heard them reporting over radio who we were and how we were sailing and where we were sailing. They saw the flag and everything else. We were in international waters." {more}

The USS Liberty Cover Up

Israel intended to sink the USS Liberty and blame Egypt for it, thus dragging the United States into a war on Israel's behalf. This seems to be a common trick of Israel. Starting with the Lavon affair, through the USS Liberty, to the fake radio transmitter that tricked Reagan into attacking Libya, to potentially 9-11 itself, Israel's game is to frame Arabs and set them up as targets for the United States.

The real question facing the American people is why the US Government seems more concerned with protecting Israel after they are caught playing these dirty tricks, rather than doing something to convince Israel not to kill any more Americans. {more}

Forgetting What They Don't Want You to Know

“People may dismiss what I say as the rantings of an angry old man, but given what is taking place today regarding the war in the Middle East and everything that may happen, my suggestion is that–while there is time–people turn off the Britney Spears, the Desperate Housewives and the football games and listen, listen carefully to what happened, as it is likely to happen again, because, as the old saying goes, ‘a leopard does not change its spots.’”

— Phil Tourney, Survivor of the Israeli attack on the USS Liberty {more}

Things are very tense in the Middle East and as a survivor of Israel’s attack on the USS Liberty 41 years ago I am convinced that the truth about what happened to us can change the world and change what people believe about “poor old Israel”, as the Liberty story is the straw that will break the back of the Zionist Government murderers. Americans will not stand with Israel when the Liberty truth is told, and it is our duty to get this done now! {more}

Congress continues to ignore the facts of the Liberty attack as well as the pleas for an investigation.

What is Congress afraid of?...Could it be the fact that AIPAC (The American Israel Public Affairs Committee) lines the pockets of many of our Senators and Congressmen? The Center for Responsive Politics reports that between the years of 1990-2004, pro-Israel groups gave $56.8 million in campaign contributions to U.S. politicians.

On this the 42nd anniversary of the criminal attack on the USS Liberty, please take a moment to remember those killed and injured that day, and also, take the time to contact your Congressman and Senators to demand an official investigation into this tragedy.

To the USS Liberty survivors and the families of those lost...You have not been forgotten by your fellow Americans and we will continue to fight and demand justice for the Liberty! {more} 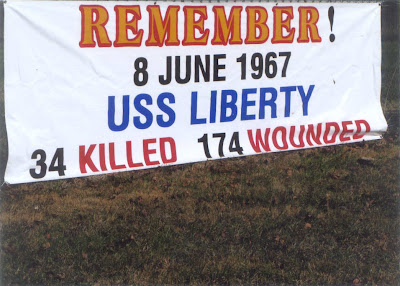 Special Report: The Attack on the USS Liberty

Remember what Israel did to the USS Liberty and what our government did to us.

The Coming Storm - Avenge the USS Liberty
Posted by Rocker at 5:30 AM